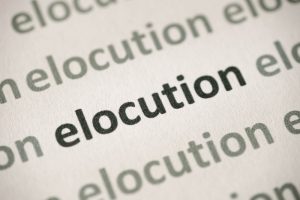 The word elocution creates old-fashioned images of people repeating vowels in order to speak with a ‘better’ accent. Although this now seems terribly outdated, people still use the word elocution! When I tell people I’m a voice and accent trainer, people often say: ‘So, you teach elocution?’

Good question. Do I teach elocution?

The Oxford and Cambridge English dictionaries define elocution as a skill and an art respectively, both focusing on speech clarity. Oxford refers to ‘clear and expressive speech’, while Cambridge mentions public speaking and breathing to help ‘control’ the voice.

Many of my clients want to speak more clearly, having had feedback that they speak ‘too fast’ or people often ask them to repeat what they say. To get our spoken messages across effectively, we need to be understood by most people most of the time. I help people with this.

Our first language(s) influence our pronunciation in other languages, which can affect how people understand us, sometimes leading to frustration and lost time for both the speaker and listener. One of the main aims of accent reduction or pronunciation training is helping non-native speakers pronounce English clearly.

As Cambridge says, modern voice training sessions do include work on breathing to help ‘control’ the voice. Good breathing habits and choices can help us feel and sound more confident, varied and free, so they are core elements of voice work.

The Collins definition of elocution includes something a little more controversial: learning to speak ‘in an accent that is considered to be standard…’.

What is the standard English accent? Today, we celebrate the rich variety of accents in the UK and all around the English-speaking world, and rightly so! Accents are key parts of our identities and I strongly believe that it’s possible to speak clearly in any accent, so there is no real need to ‘lose’ one to communicate well.

However, my clients who are non-native English speakers often complain about the lack of a clear pronunciation model in the UK: it can be confusing to hear such a variety of pronunciations and even frustrating when well-meaning people advise: ‘just pronounce it how you want’, or ‘your accent is lovely’. Variety of speech is lovely, but sometimes in our non-native languages, we need a bit of guidance. What should someone do to minimise misunderstandings or recurring pronunciation issues, if the ‘standard’ seems so flexible?

This is where accent reduction training comes in. It offers guidance, so having a ‘standard’ or a guideline to aim for is an essential tool. Here in London, we tend to use a relaxed, modern version of Received Pronunciation (RP) as that guideline. RP is based on the speech of southern England. It does not mean speaking ‘posh’ or speaking like the Queen (only the Queen speaks like the Queen!) but it does mean having a clear pronunciation model that, when applied, will help with clarity. The RP accent is not intrinsically better than any other, but it’s quite well recognised and understood, and many of its features fit well with clear speech. The framework is flexible: depending on a client’s personal aims, we might work towards as near-native RP as we can or pick and choose certain parts just to help with clarity.

Collins also mentions ‘acceptable’. I wonder: acceptable to whom? A pronunciation model is a useful training tool, but I believe that no accent is objectively more – or less – acceptable than another.

So, is elocution still relevant?

As modern voice training does involve working on clarity and breath, and accent reduction uses a standard model to an extent, we can say that elocution is alive, well and still helpful! However, I don’t consider the ‘acceptable’ part of elocution so relevant to voice training today.

If you would like to find out more about elocution, accent reduction or voice training, get in touch!

Accent Reduction? Pronunciation? What do I Teach?

We use cookies on our website to give you the most relevant experience by remembering your preferences and repeat visits. By clicking “Accept”, you consent to the use of ALL the cookies.
Cookie settingsACCEPTRead More

This website uses cookies to improve your experience while you navigate through the website. Out of these, the cookies that are categorized as necessary are stored on your browser as they are essential for the working of basic functionalities of the website. We also use third-party cookies that help us analyze and understand how you use this website. These cookies will be stored in your browser only with your consent. You also have the option to opt-out of these cookies. But opting out of some of these cookies may affect your browsing experience.
Necessary Always Enabled
Necessary cookies are absolutely essential for the website to function properly. These cookies ensure basic functionalities and security features of the website, anonymously.
Functional
Functional cookies help to perform certain functionalities like sharing the content of the website on social media platforms, collect feedbacks, and other third-party features.
Performance
Performance cookies are used to understand and analyze the key performance indexes of the website which helps in delivering a better user experience for the visitors.
Analytics
Analytical cookies are used to understand how visitors interact with the website. These cookies help provide information on metrics the number of visitors, bounce rate, traffic source, etc.
Advertisement
Advertisement cookies are used to provide visitors with relevant ads and marketing campaigns. These cookies track visitors across websites and collect information to provide customized ads.
Others
Other uncategorized cookies are those that are being analyzed and have not been classified into a category as yet.
SAVE & ACCEPT